Advertised as a “city within a city,” Marina City proved to be a prototype for most of Goldberg’s subsequent work. It’s a truly multi-use project packed with amenities including retail space, a bowling alley, a movie theater and an office block.

In the midst of the great post-war suburban exodus, Goldberg and his client, the Building Service Employees International Union, knew there was still a market for apartments designed for single/childless Chicagoans working in the Loop. Ever since then, Marina City has served as a model for other apartment buildings catering to the population that wants to live close to where they work and play.

Modern in design but a clear departure from, maybe even a reaction against, the Miesian glass boxes so popular at the time. The two circular towers are cast concrete with 32-foot in diameter reinforced-concrete central cores. It’s best known for its petal-shaped garage floors and balconies. And the pie-shaped apartments are highly sought-after in part because of every unit’s spectacular city views.

In 1970, Sears chairman Gordon Metcalf explained, “Being the largest retailer in the world, we thought we should have the largest headquarters in the world.” Just a few years later, by completing the structure, the retailer was able to consolidate approximately 6,500 employees who’d been working around the city in seven locations.

The tower soars to a height limited only by the Federal Aviation Authority at the time of its construction — 1454 feet. For forty years it held the title of tallest building in North America.

Its bundled-tube construction was revolutionary. It consists of 9 tubes that are each seventy-five feet square. As the tubes rise from the ground, they are set back at the 50th, 66th and 90th floors leaving two tubes to reach the building’s full height. The setbacks provide lateral stiffness allowing the tower to resist the “Windy City’s” windy conditions and are also indicative of the original use of the building.

When Sears first occupied the building, the merchandising department utilized the first 50 floors. The massive floors enabled employee interaction with limited elevator travel. The setback floors above were leased out and proved to be extremely profitable.

Known as the Willis Tower since 2009, it is now one of Chicago’s most popular attractions. The glass-enclosed balconies on its 103rd floor, known as The Ledge, are not for the faint of heart. As you look down, you’ll see nothing between you and the sidewalk but 1,353 feet of air. Once you’ve been sufficiently adrenalized, it’s time to check out the city — and on a clear day, the four other states visible from The Skydeck.

The Federal Center is a complex that includes three government buildings, a precisely designed plaza and a piece of public art.

The buildings are quintessential examples of the International Style and exhibit principles of Mid-Century Modern design. The use of this style for government buildings was intentional and a bit radical. Up until this point – and even since then – government buildings were more often designed in a classical style. However, this style was an intentional reaction against that precedent. This modern style communicated that we were on the cutting-edge. In Chicago, we were technological; we were looking forward and not backward.

The complex occupies a four-and-a-half acre site that is paved in light-gray granite. The same pavers on the Plaza extend throughout the building’s interiors. It’s a stunning detail that fuses the entire project together. Mies Van Der Rohe’s striking precision is evidenced by the fact that the seams in the plaza’s pavers perfectly align with structural elements in each building. It’s magical.

Although Mies Van Der Rohe died during the construction of this project, his associates carried out his exacting standards and accessorized the plaza with a breathtaking bright red work of art. Alexander Calder’s steel Flamingo is a graceful, arched, curvilinear masterpiece and is a complimentary contrast to the stark, stiff, rigid Miesian architecture that surrounds it.

Quickly becoming one of Chicago’s newest architecture superstars, River Point sits at the confluence of all three branches of the Chicago River. Made possible by the purchase of air rights over active Amtrak train tracks, the building’s site includes a 1.5-acre public park.

Its stunning arched facade is more than just a pretty face. The building’s parabolic arch is structurally significant and a necessary result of its tricky shaped lot. Of course, it also offers aesthetic appeal, and when the light hits it just right, reflections of the shimmering river and neighboring buildings will take your breath away.

These iconic experiences should top your to-do list. No matter when you visit or how long you stay, as you cross off each item, you’re certain to learn something new and have fun in the process. 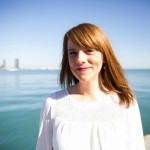